Wish to view the changes that you’ve made to your campaign over its lifetime? Or ever felt the need to roll back the changes to any of the earlier versions of your campaign? All this is possible if a Version History mechanism is in place.

A Version History mechanism records changes that you’ve made to your campaign(s) over its lifetime, i.e., you can access all the copies of the changes. It provides a way to look back at previous iterations and enables you to restore an older version.

Some advantages of using Version History are:

Consider you’ve recently made some changes to your campaign; however, they cause some website elements to break or adversely affect your website experience. For this, you plan to roll back to the previous configurations of your campaign.

One way is to do this is by remembering the changes you've made in the past and manually revert to them. Do you think that this is a feasible solution if there are a lot of changes? Of course not.

Another way to do this is by using the Version History feature of VWO. With this, you can quickly review and roll back to an earlier version of your campaign with a single click. You do not have to worry about remembering the changes and manually reverse them; VWO does it for you.

Any time you modify your VWO Testing or Deploy campaign, a new version is saved in the form of a log. A version is created every time a set of changes are saved using the editor.

NOTE: If you do not see older versions of your existing campaigns, then they were perhaps created before this feature was launched. However, new campaigns created after this feature is launched will have their history in their entirety.

In VWO, a Version History shows the following information:

With each saved version, you see a vertical ellipses icon (⋮), which gives you the following options: name the version, view version changes, and restore version. Along with this, you also have an option to filter the named versions. This can be done using the Show only named versions option.

NOTE:
1. For Enterprise and Pro accounts, you can restore any version from the history of the campaign.
2. Restore in Growth accounts is limited to the last 3 versions only.

To view the Version History of your VWO campaign, perform this:

By default, a version is saved with the time and date of creation. However, it is a good practice to give a name to save versions. Say, giving a name in correspondence to why you changed the campaign configurations could help you down the line.

NOTE: Naming a version is optional. Using the View this version option, you can view the changes made to the particular version of a campaign. We recommend you first view the version changes before restoring it. When viewing a variation, you can switch between the different versions and also restore a version. 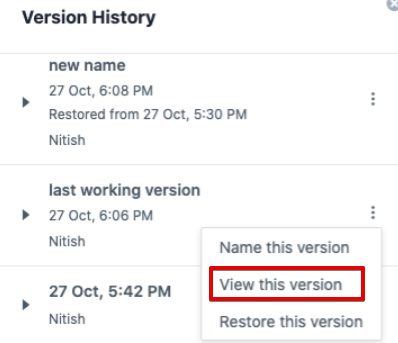 To view version changes, click on the vertical ellipses icon (⋮) corresponding to the saved version, and click View this version option.

Using the Restore this variation option, you can preview and restore an older variation. When restored, a new version is created, which will carry the details of which version it was restored from. You can even choose to restore a specific variation(s) of an older version; the other variations are carried over from the currently active versions. If the version has any campaign JS applied, you can choose to restore it also.

You can restore a version with the following two options:

Either way, when you restore a version, the details of what you can choose to restore are displayed. You can choose between the different variations, campaign JS, or CSS (if applied).