To access your test report, select the campaign for which you want to view the report, and go to the REPORT tab.

To view the report corresponding to a goal, select one from the GOALS panel on the right. Additionally, you can also compare the data of different goals using the COMPARE GOALS option.

NOTE: While using the Date Range Filter, Segments Filter, or Changing the Base Variation, a loader appears on the page notifying you that the changes are being applied based on your selection. You are not allowed to perform any action until the results are fetched. A success message appears as soon as the changes are applied, and the report data is updated accordingly.

View Report for a Date Range

Date filter enables you to filter data for the specified date range. To specify a date range, you can either use the existing options or can specify a custom date range using the calendar control. 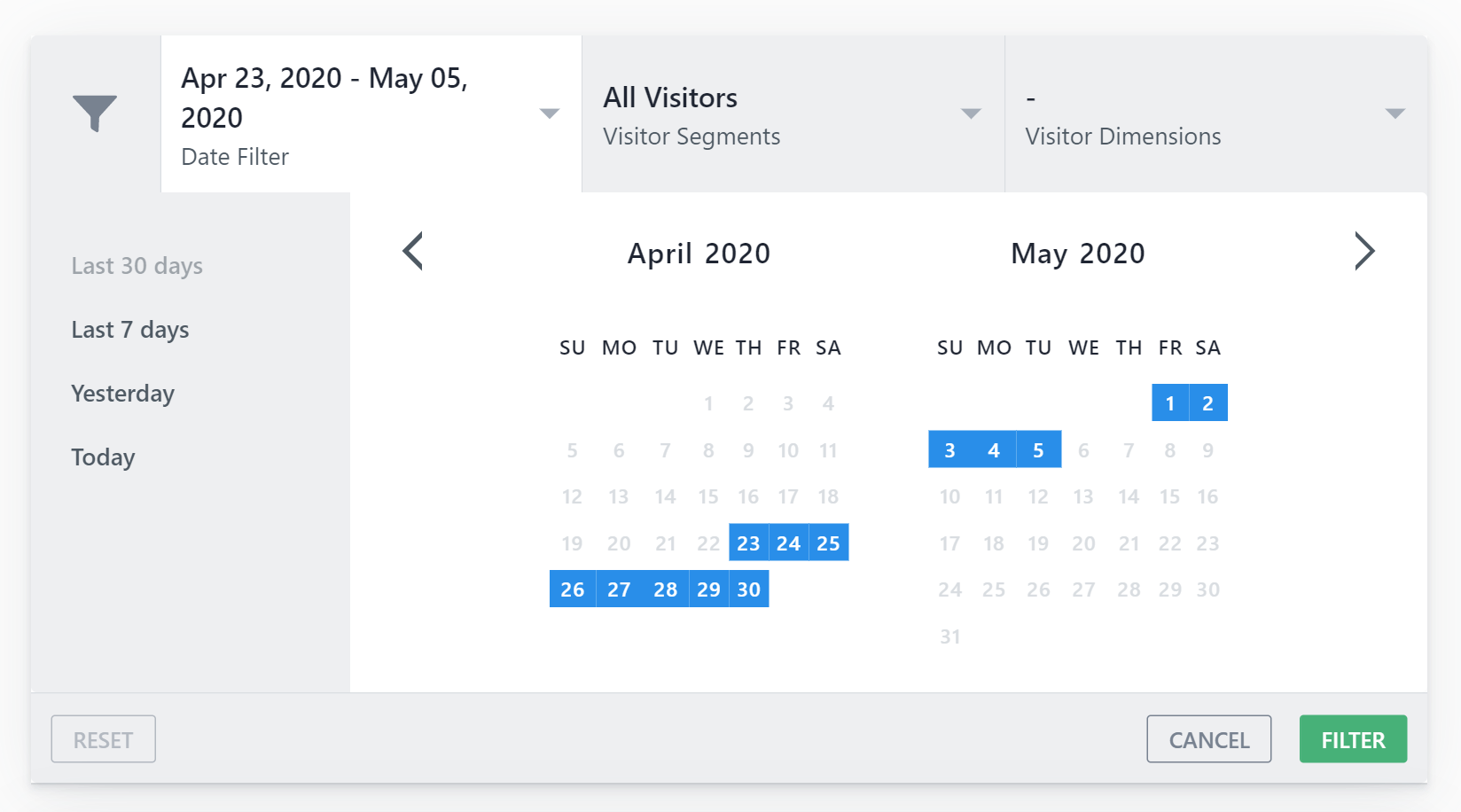 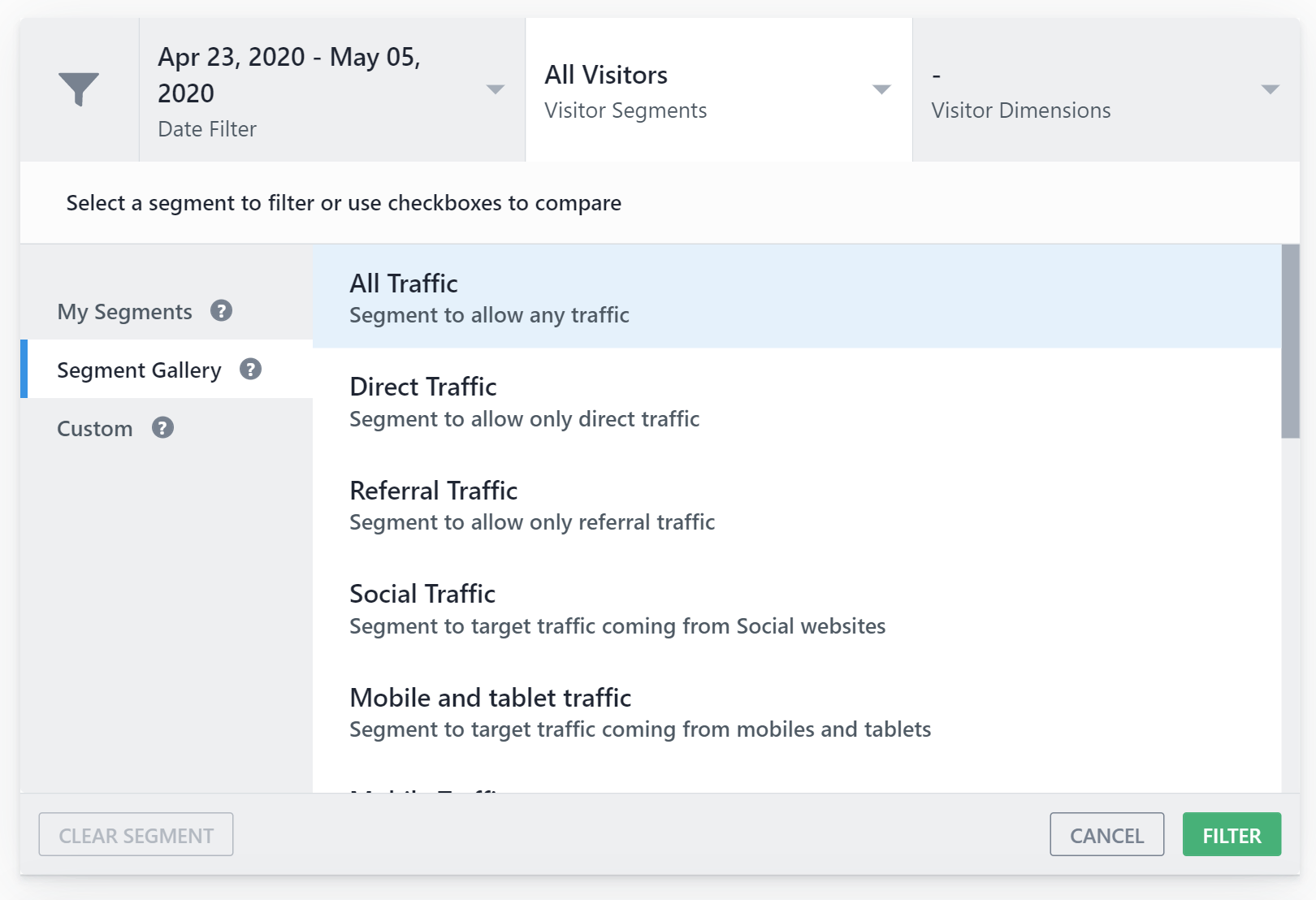 The notification box displays the status of your campaign and any warnings you must be aware of.

To know more about VWO warnings, refer to Warnings in VWO.

You can customize the layout of your report using the View Settings option. To access this option, click on the gear icon present next to the stats table. 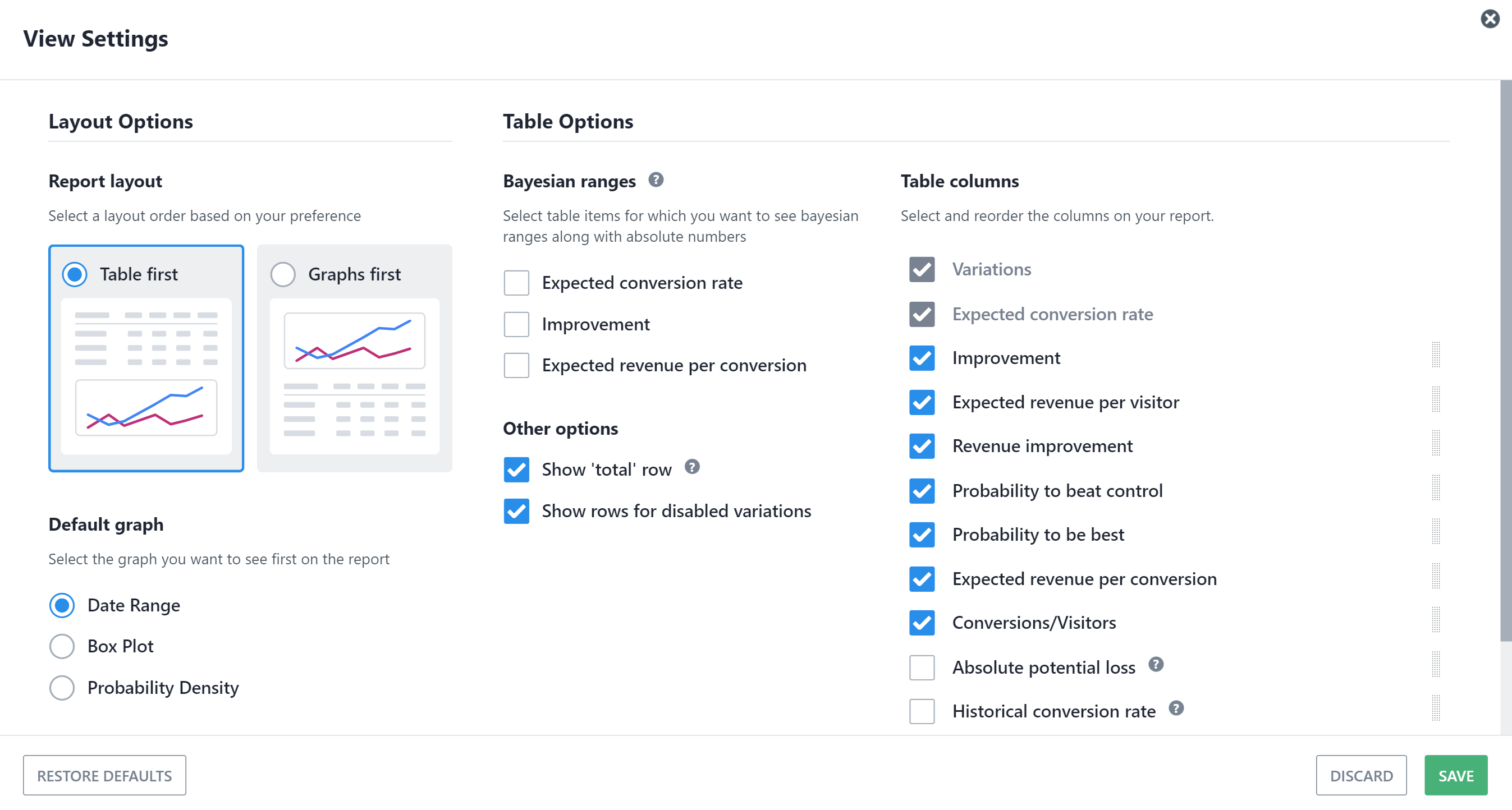 The report table displays the data collected for each variation included in the campaign. By default, the control is set as the base for comparing that data. You can change the base to any other variation for calculations using the Use this as Baseline option and can disable or preview the variations using Disable variation and Preview variation options from the ellipses icon (⋮) present at the right end of the table row.

The graph provides information on the conversion rate, conversions, visitors, revenue per visitor, and revenue. You can view the graph in either of the following ways:

In the Date Range view, you can view the Conversion Rate, Conversions, Visitors, and Revenue per visitors' data over a period of time. You can choose a custom date range using the Date Filter. For more information on Date Filter, refer to the View Report for a Date Range section.

NOTE: To get the most actual results, it is recommended to have a diverse set of data. For example, people tend to buy more mobile phones when the manufacturer announces a price cut and conversion rate for that month is not the best indicator of the overall picture. 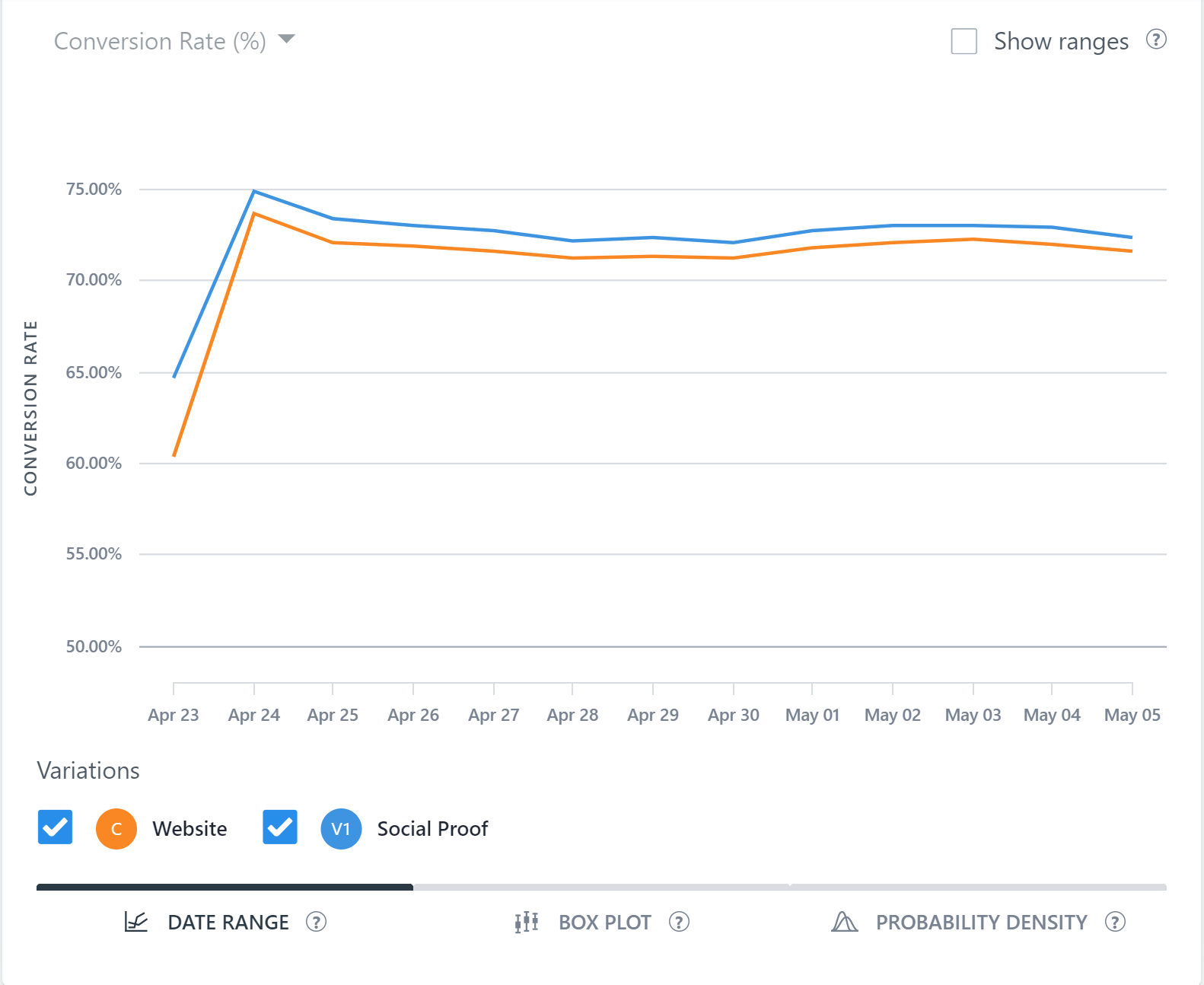 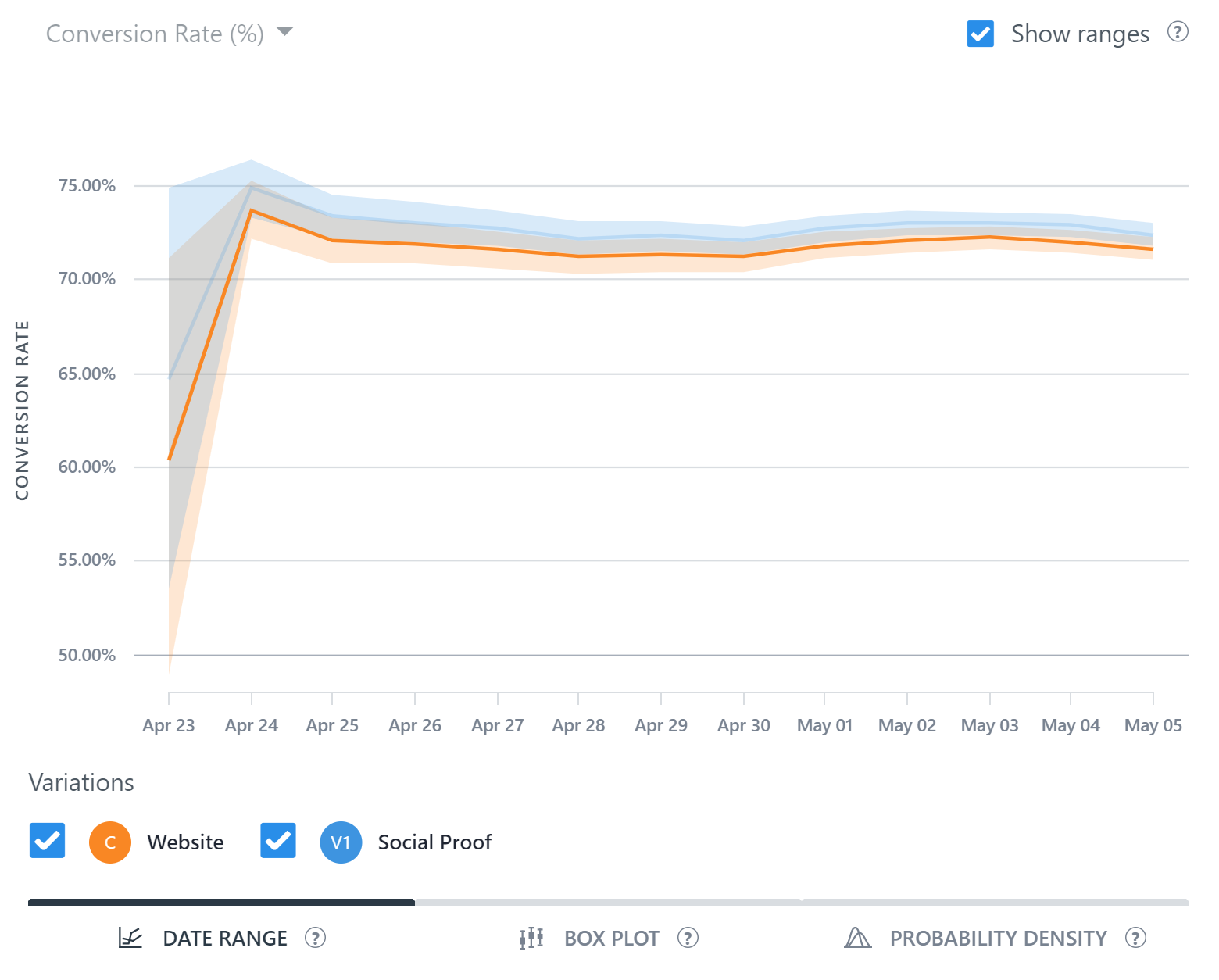 You can also turn on ranges and see how the conversion rate range for variations have evolved over time. Ideally, the ranges become smaller over time, and that should reflect in the graph. If the ranges go wide, it indicates fluctuations in the data. If the ranges overlap, it signifies uncertainty about which variation is performing better. Read more about uncertainty overlap in the Box Plot section.

In the Box Plot view, you can view Revenue, Revenue Per Visitor, Conversions, Conversion Rate, and Visitors as box plots to see any uncertainty overlap amongst Variations and Baseline. 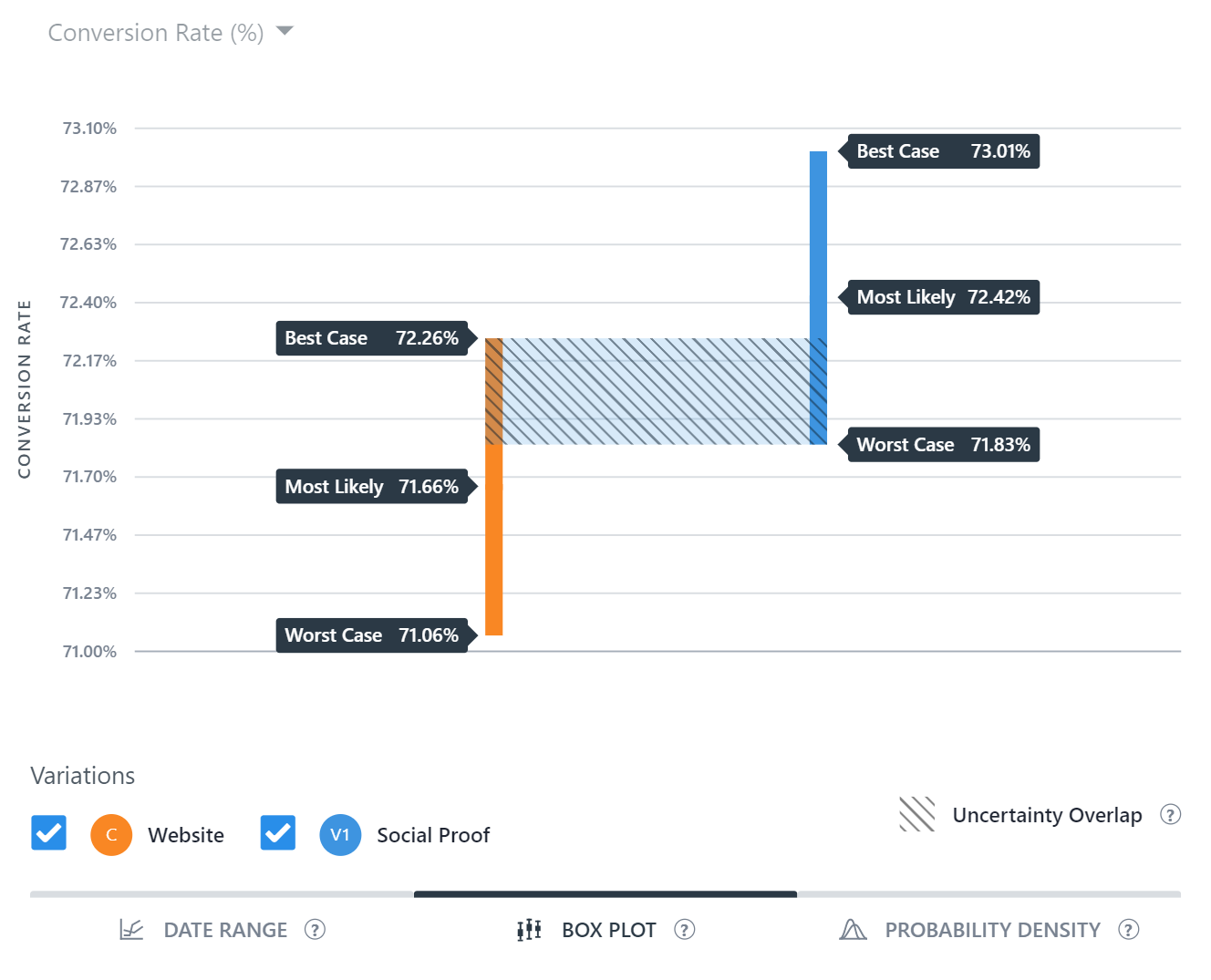 Interpreting the Change in Box Plot
In this graph, the box plots of Control and Variations are shown along with the uncertainty overlap. The orange is the box plot of Control, and the other in blue is the box plot of Variation. Based on the data collected, the Best Case, Most Likely, and Worst Case are derived. Here, the Most Likely value represents the median value of the conversion rate. The Best Case and Worst Case values represent extreme cases. In the probability distribution curve below, you’ll see that Best Case and Worst Case scenarios are way less probable than the Most Likely scenario. The more the data, the higher the probability of conversion rate near the Most Likely(median) value. The area above the uncertainty overlap indicates that the conversions are much higher in the Variation compared to the Control. 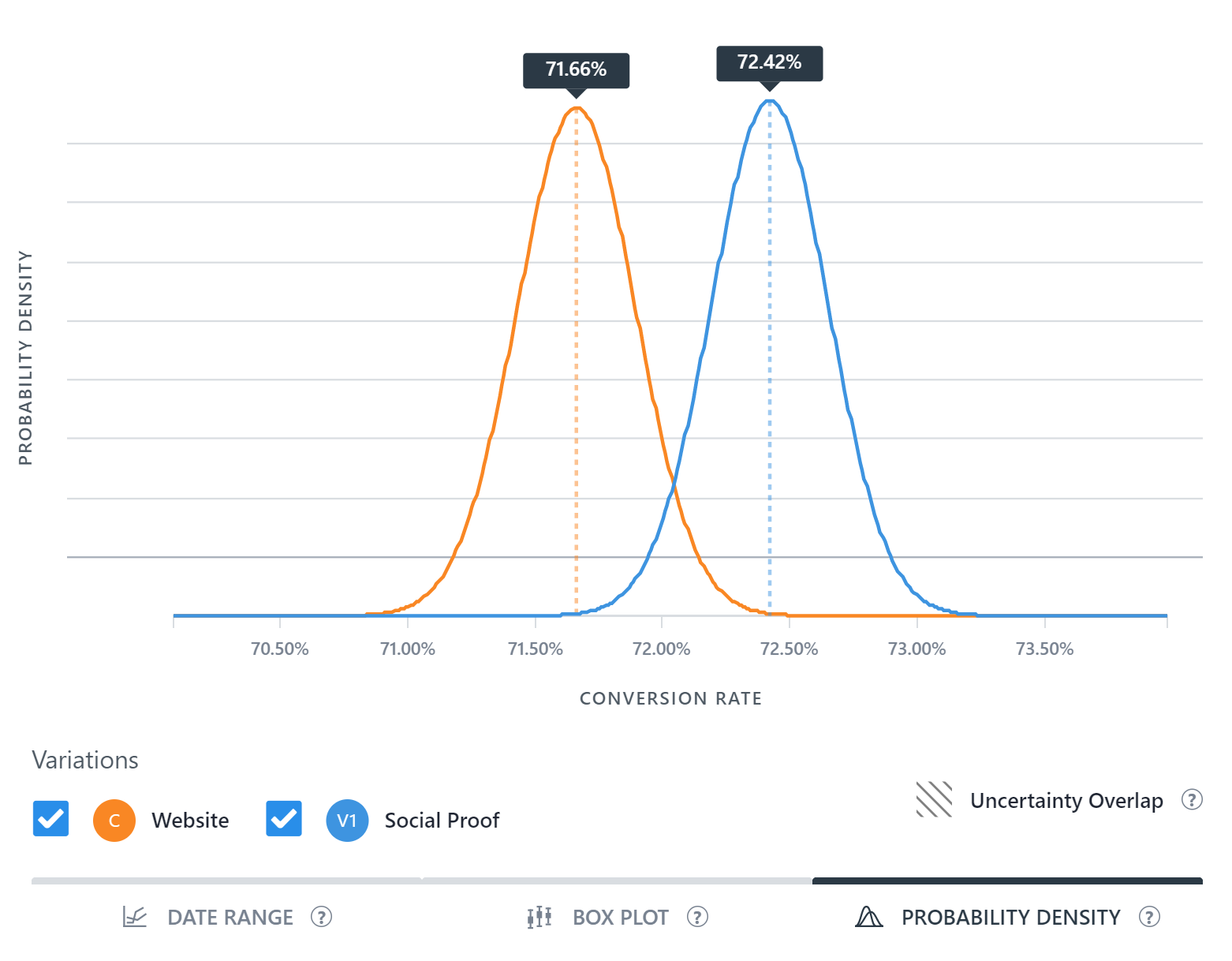