The Estimated Duration Calculator calculates the estimated duration of your Multivariate test after a week and displays it automatically based on the stats seen in your test. After the last step of the creation process and when you start the campaign, you can see this option, but it has run for less than a week.

NOTE: The Estimated Duration Calculator is only available in Multivariate Test. 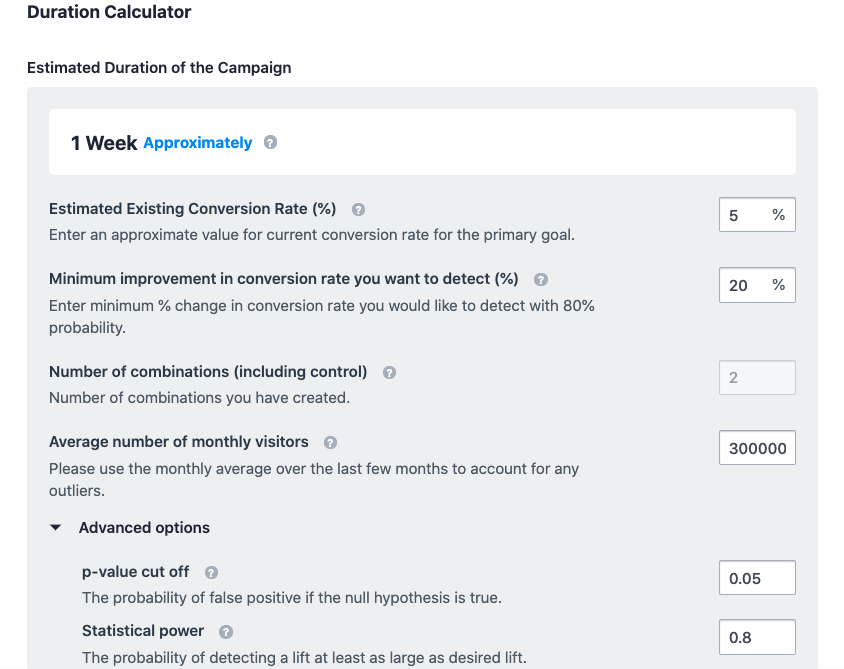 Using the current data and the expected conversion lift you want from the Multivariate test, VWO SmartStats will give you an estimate of how long you’ll need to run the test.

To know the details and obtain data regarding your control page, you can refer to any existing analytics tool you are using (Google Analytics, Mixpanel, Kissmetrics, and so on) or run a Conversion Tracking test in VWO. To learn more about VWO SmartStats, SmartStats in VWO.

The Duration Calculator screen calculates the estimated duration through the following:

ADVANCED OPTIONS
These advanced options are only available in Multivariate tests.

The estimated duration may differ from the initial estimate in the duration calculator if the actual number of visitors differs significantly from what you entered.