This feature is currently in early access. Please get in touch with your success manager or support@vwo.com in case you are interested in running a campaign with this feature.

VWO enables you to run an A/B test on your website and uses the Bayesian-based SmartStats engine to determine which variation of your website is better and by how much. It does that by analyzing the visitors and conversion information tracked in a test. Traditionally, in an A/B test, the visitors who become part of the test are split evenly between the two variants until the test declares one of them as the winners. After that, by allocating 100% traffic to the winning variation or building the website changes, all the visitors are shown the better variation.

At this point, our customers start to get the maximum output by deploying the best variation on their website.

With the new algorithm, we aim to maximize the website's output by continuously exposing the better performing variation to more and more visitors on your website. We do this by continuously comparing the performance of all variations and acting on the output reported by the comparison.

There needs to be a good balance between 'exploration' and 'exploitation' to maximize conversions or revenue. We use an epsilon-greedy multi-armed bandit approach to balance exploration and exploitation. Based on this strategy, we dynamically change the traffic split of all variations as per their performance.

How Do We Calculate the Traffic Split of Variations?

VWO starts to adjust the traffic split of all variations to expose the better performing variation to your website traffic. Multiple factors determine the traffic to be allocated to each variation. These factors are:

These weights indicate the contribution of content and content-interaction variables. All weights associated with a variation contribute towards its conversion rate or average revenue. Both content weight and content interaction weight are Random Variables that follow a Normal distribution.

How are Weights Learned?

We get the conversions and visitor numbers for each variation. The update algorithm will work best if we know the sequence in which visitors land and conversions happen on your website. Using the following equations, we update the parameters of every weight distribution:

Defining Traffic Split Based on Weights

Once we have all the updated weights, we then simulate 10K visitors and use a Thompson Sampling based hill-climbing algorithm to determine which variation will be the best one to show to each of those 10,000 visitors. The result of this exercise gives us the traffic split based on the weights.

How Does the Hill-climbing Algorithm Work?

Say we have 2 sections with 3 variations each - so we now have 6 content weights as there are 6 different content pieces and 9 content interaction weights as there can be 9 pairs from these contents.

To calculate this score, we fetch all associated weights for a given combination and sum them up. So for any combination, there will be 2 content weights (one from each section) and 1 interaction weight (of this specific pair). To get the value of each weight, we sample from its corresponding distribution, and after repeating this exercise 10K times, we obtain a traffic split for each variation based on their winning proportion.

Let ∆t be the difference between the expected reward of the optimal arm and the selected arm at time t:

The objective of our bandit problem is to estimate µ and σ while minimizing cumulative regret over T rounds:

Following are the regret plots of 100 sims each for 4 different cases where the cumulative regret of the above-proposed algorithm is compared with the Multivariate Testing algorithm over T rounds. In all cases, we use 10% traffic for exploration. 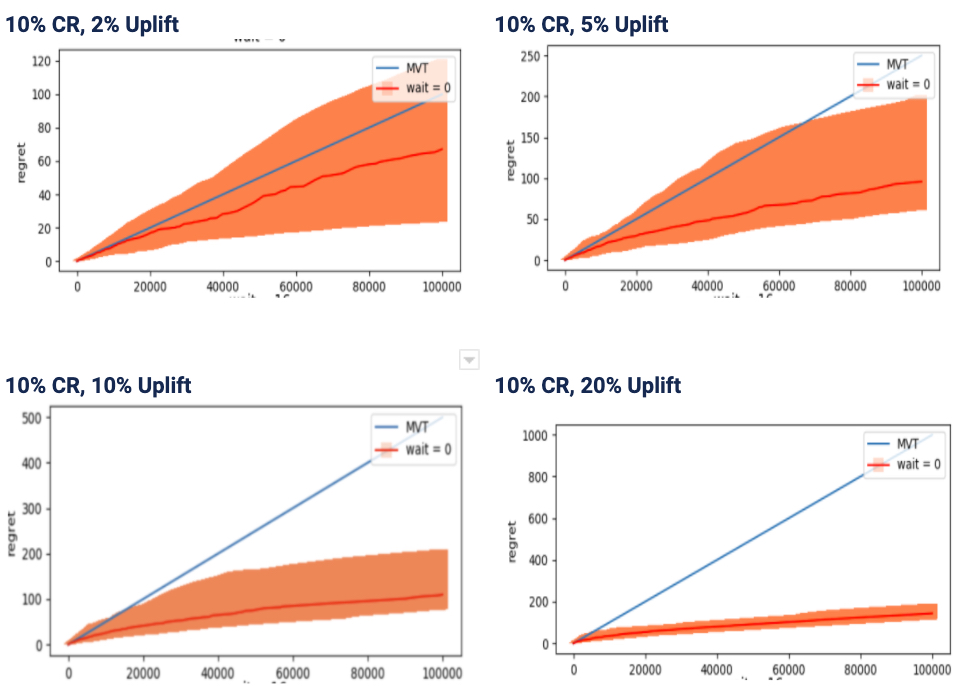 We see in all cases, the cumulative regret gets saturated over time with the proposed algorithm.

In this article, we explained the overall view of the different components involved in the Multi-Armed Bandit algorithm. MAB is a great algorithm for optimizers who care more about maximizing a metric in a short time and can give up on statistical significance.

The MAB algorithm described above is an extension of the TrueSkill algorithm developed by Microsoft. They use it in Xbox to rank and match players so that a player is matched to a player of a similar level. This ensures more engagement in the game. Much like our case where we try to match a visitor with a variation that will engage him. Intuitively we can feel that if we collect data about how the visitors have responded to variations we have, we can then use some Machine Learning algorithm to use this data for training. And at the time of inference, it will return a score for every variation for a given visitor, and whichever variation gives a higher score, we'll show that variation to the visitor.

We used the following factor graph was used to obtain the update equations mentioned in the article. 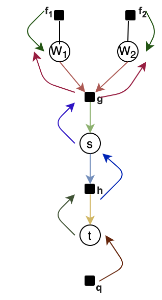 The equations in step 6

The following update equations are obtained from T.Minka’s thesis on Expectation Propagation:

by placing the gradient of mean in the mean equation, we will obtain:

by placing the gradient of mean and variance in the variance equation, we will obtain: